In search of the snow on Place Fell by Ullswater

Well it’s the new year and this time last year we were wading through thick snow. So far this year all we’ve had is rain, rain and a little more rain. Until last weekend – when we finally got a ‘proper winter’ day in the Lake District. So we decided to head up onto Place Fell in search of some snow. As always feel free to skip the boring words and just enjoy the photos…

The early morning Morgan walk had shown signs of promise, with overnight snow on the fell tops and a glow in the sky as the sun did its best to remind us it was still up there.

The views from the house were also looking inviting, with the Red Deer massing on Place Fell opposite…

Red Deer on Place Fell in the Snow

Morgan and I returned home after our early morning foray to be told that we were expecting visitors – friends on my son and their mum. What better way to keep 2 eight year olds, a six year old and their respective parentals happy and amused than a stroll up Place Fell on a glorious day??

The walk up to Boredale Hause 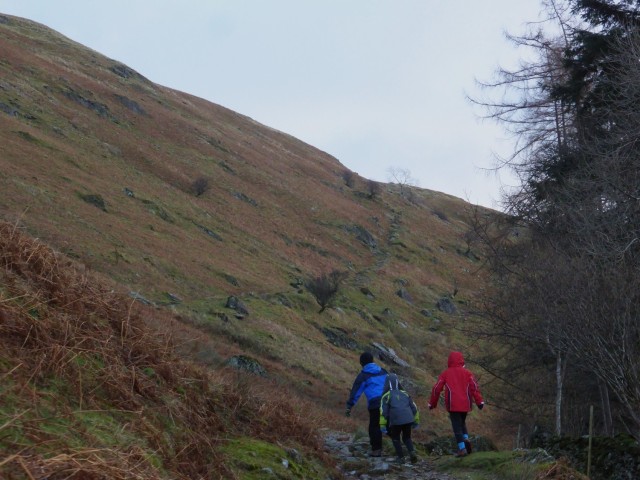 The boys set off up to Boredale Hause

So we set off mid morning heading for Boredale Hause. Obviously were not alone in this ambition and it soon became clear that we’d have to head off piste if we were going to avoid the procession of happy walkers heading up the main route – and more importantly the inevitable excitement for Morgan of meeting other dogs, and the equally inevitable disappointment for the other dogs (and me) when they realised Morgan was a little too “friendly”… 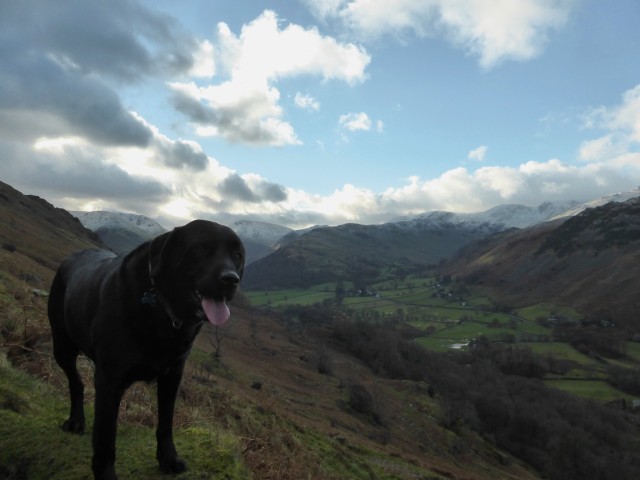 Morgan keeps an eye out for any potential new friends

The boys did well to make it up to Boredale without too much complaint – although my son decided to pick up a “very interesting rock” which inevitably he ended up putting in my rucksack to carry for the rest of the walk (and which equally inevitably has been sitting outside the back door since we got back – obviously not as fascinating as first imagined..)

Panorama from Boredale Hause towards Helvellyn

Having made it up to Boredale without too many “dog on dog” incidents we realised that taking the main route up Place Fell was going to be a) too much for all the boys and b) more importantly too much for me to cope with in terms of Morgan close protection. He’d  already spent too much time on the lead – not what he’s designed for and not ideal for me either as he has a tendency to randomly leap off the path to investigate a smell taking me with him. So we headed off towards Angle Tarn with a view to finding the snow and at least getting as far as the cairn on Rake Crag. 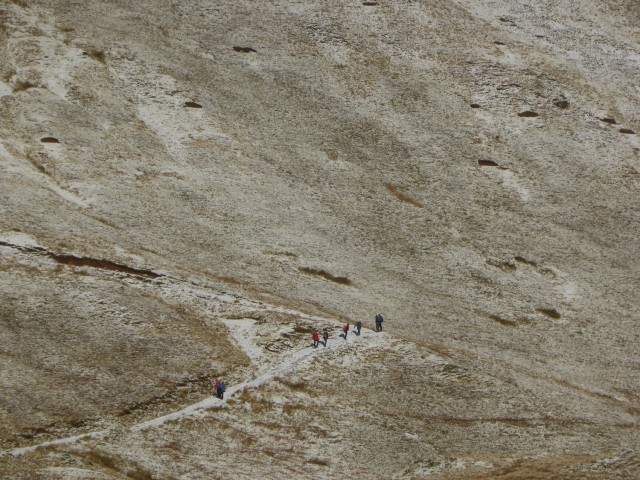 The boys were beginning to flag a little but we managed to get everyone energized by playing the “who’s going to be first to get to the snow” game (that and a timely distribution of Haribos..)

Heading towards the snow line

Morgan out in front as always 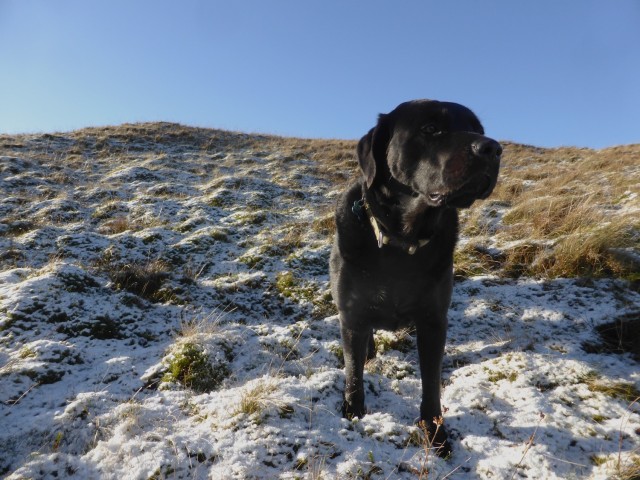 Morgan wins the “four feet in the snow” contest

We headed off the Angle Tarn path and up Rake Crag where we were walking in a little snow and most importantly the boys were able to make snow balls. First of the year and inevitably thrown with mixed success at me..

Mountain Morgan soaks up the views towards Helvellyn

Morgan obviously remained aloof from all the nonsense and enjoyed the views (probably sulking because there were no other people or dogs about…) Anyway we arrived at Rake Crag – or at least I think that’s what it’s called – either way it’s a nice cairn with some cracking views…. 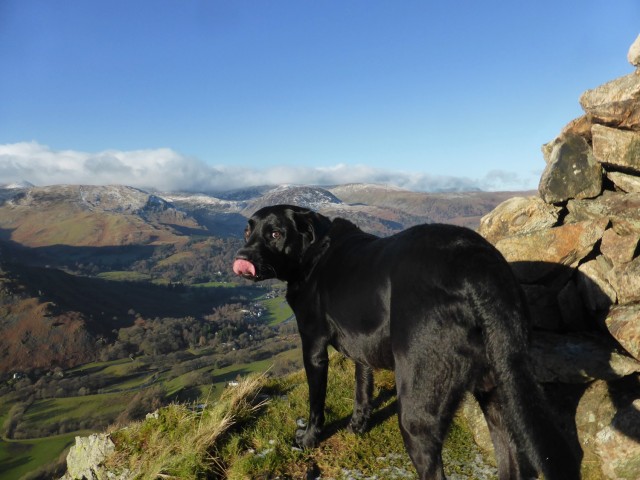 We didn’t hang around too long as it was a little breezy up there as demonstrated by this photo of Morgans ears behaving badly..

Morgan having a bad ear moment…

Those of you who look closely will see my son holding a rather large snow ball.Rather than hurl it at me I managed to negotiate its formal burial in the shady side of the cairn. So if you’re up there over the next week have a look for it.

he Return to Boredale Hause

We headed back down to Boredale Hause aiming to again avoid the crowds by descending via the “Pipe Track” to Beckstones rather than mow down the hordes climbing up the main drag. By this time the sun was shining in all its glory and the views across the Valley towards Ullswater and Helvellyn were magnificent – although for those of you atop Helvellyn it still looked a little claggy…

View to Ullswater from above Boredale Hause

The views south west over Deepdale were none too shabby either…

View across to Deepdale from above Boredale Hause

As always the mere fact were heading home and downhill seemed to give a new lease of life to tired legs and the boys starting leaping down the fell like demented things – much to the delight of Morgan who of course expected us to head back towards the masses.

We headed through Beckstones towards Crookabeck Farm, home of our friend Charlene from Beyond Imagination Photography and also to her sister in law Hazel, who’s just started a new business offering Holistic Therapy treatments, (check out the blatant plug – see the new Natural at Heart website!!)

Morgan reads the signs at Crookabeck

And so back home to enjoy the rest of the day. All in all a great walk in glorious weather with fantastic views and some snow thrown in for good measure. Sadly as I write this the rain has returned and all I can see out of the window is claggy mist enveloping Place Fell. Hopefully the decent “proper” winter weather will return soon!