Well after some more fresh snow at the weekend and with a forecast of sunshine and clear skies first thing it seemed rude not to head up high yesterday, especially after 2 days stuck inside painting and decorating our Lake District Cottages. So here are some photos from the walk from Patterdale, up the Grisedale Valley to Hole in the Wall, to Red Tarn, up Catstycam, back to Red Tarn and then down to Glenridding. As always please feel free to ignore the words and just scroll down and enjoy the pictures!

View towards Helvellyn from Patterdale 08:00

Following my last solo Snow walk up Helvellyn in November I thought  ought to get some company for this walk (other than Morgan of course), especially as the fell top assessors had said there was lots of compacted snow and ice up top. So Tuesday night was spent on the phone persuading Mountain Man Mike, Professor Chris & Morgan’s mate Scruffy to don their boots (well not Scruffy of course) and head on up. I agreed to meet Chris just below Lanty’s tarn at 09:00 and Mike at Red Tarn a little later. All set then…

Up the Grisedale Valley

Having been woken by my son at 06:00 I decided I couldn’t be bothered to wait around. The sun was shining and the clock was ticking. I also of course was fully aware that I am by far the slowest walker of all time so I figured I’d get a head start and Chris could catch me up. So at 08:00 Morgan and I set off. Great views on the way up Grisedale and plenty of opportunities for some Morgan path posing…..

Morgan Path Posing on the way to Hole in the wall 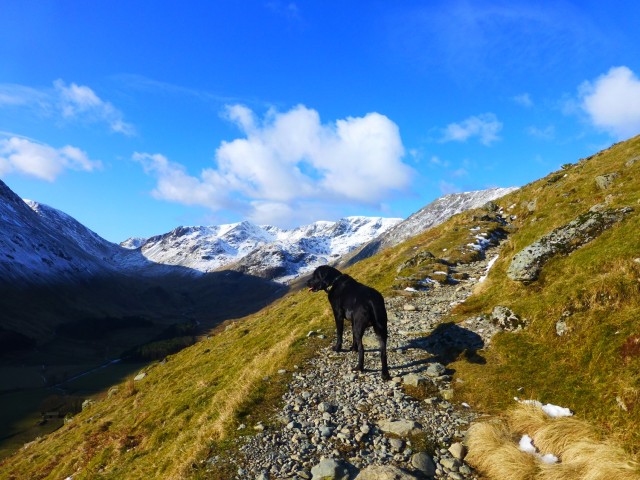 And yet more Path Posing 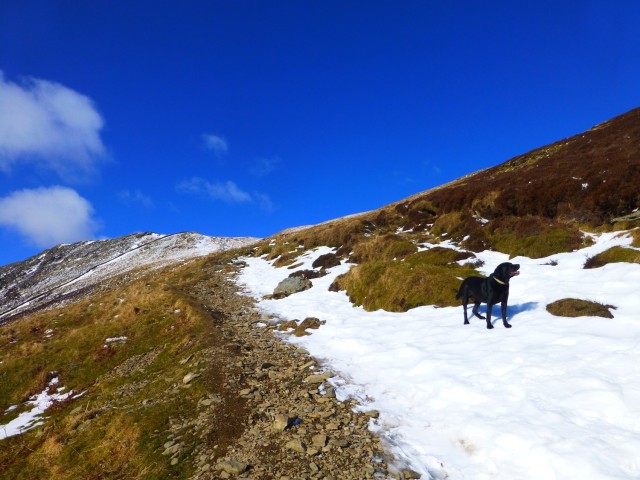 And on his first patch of snow – loving the blue skies!

Full on Snow Path towards the top

View back to Place Fell and Patterdale

The skies were truly wonderful – a deep blue and virtually cloud free. For once Morgan (well me) made good time and got to Hole in the Wall having donned my Micro Spikes for the last 100 metres or so. with the climb and the sunshine it was nice and hot on the way up and I dreaded arriving and having to heave Morgan over the style. I needn’t have worried – several months of accumulated snow meant the usual 5 foot of steps was now somewhat easier…

Hole in the Wall

I called Chris and agreed to wait for him and Scruffy. I figured I could spend a while catching some rays and enjoying the views, but hadn’t reckoned on the biting wind. Time to don hat, gloves and coat, and for Morgan to do some rehydrating…

Morgan rehydrates with Helvellyn as a backdrop

Helvellyn, Catstycam and Striding Edge from Hole in the Wall 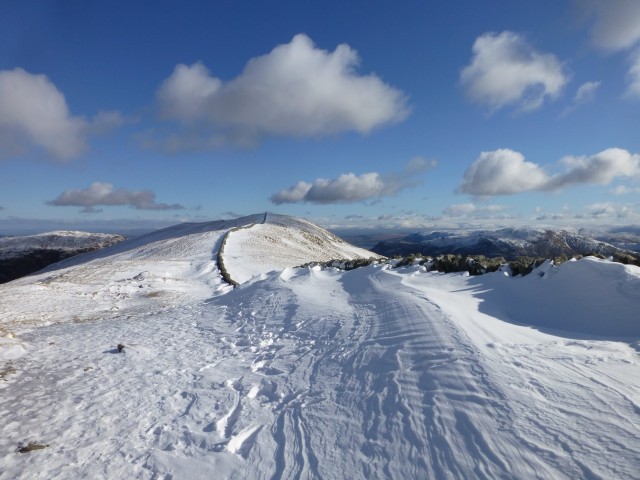 Hole in the Wall Panorama 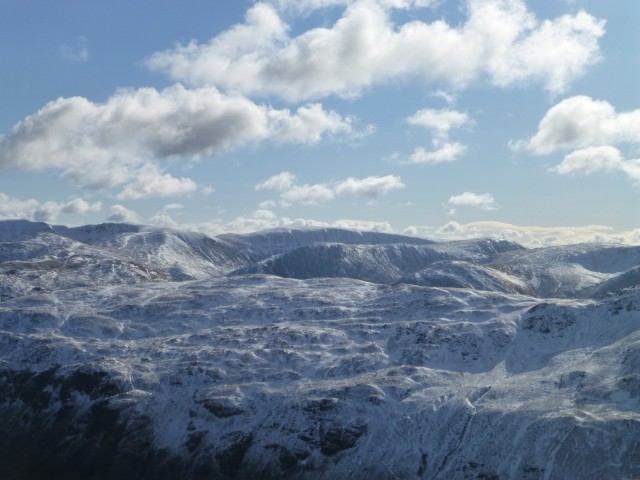 Eventually we spotted Chris and Scruffy coming up the path. Morgan’s eyesight isn’t quite what it should be so he was a little unsure who it was we were waiting for and adopted the “who’s that” pose. Still not a bad backdrop view to be getting on with….

When Chris and Scruffy arrived naturally Morgan was very pleased to see them, and Chris was keen to show off his trendy Kathmandu shades. So here they are…

Chris and Scruffy. Chris is the one in the shades….

We then headed to Red Tarn to await the arrival of Mountain Man Mike, who’d driven up to Greenside Mine and was currently sprinting up the Greenside path at a rate of knots having started about 3 hours after everyone else as usual. So once we arrived at Red Tarn it was time for a few more photos… 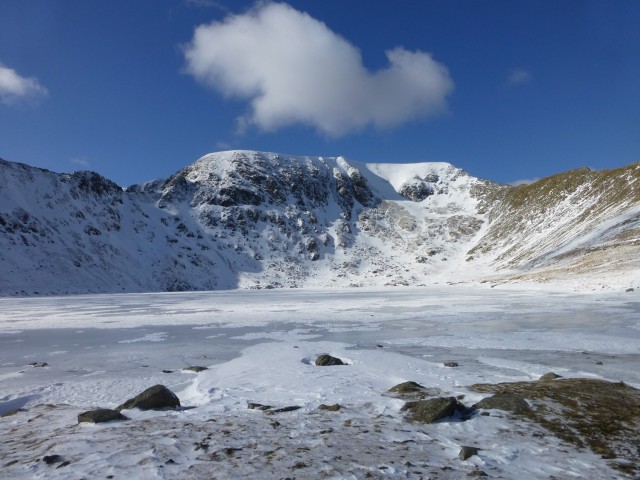 Helvellyn and a Frozen Red Tarn

Mike arrived sooner than expected to be greeted by raptures of joy by both the hounds. Why this is remains a mystery to Chris and I, especially as Mike never shares his lunch with the dogs on the hill – unlike their faithful and loving masters…. 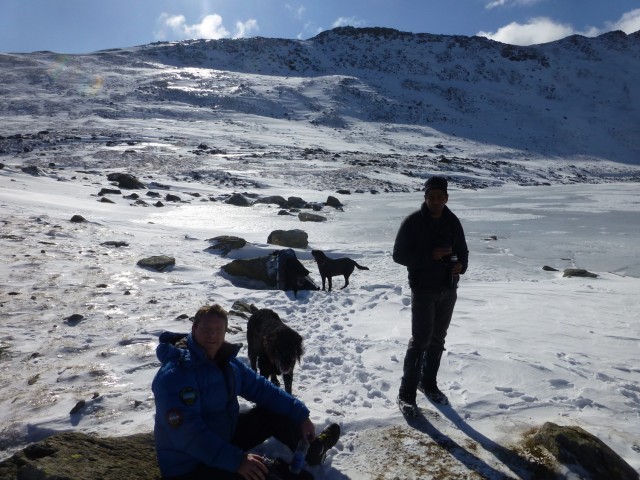 Coffee Break by Red Tarn with Striding Edge behind

We hadn’t actually decided where we were headed next but a quick equipment check showed that between us, with the exception of Chris, we were hardly equipped for ice climbing up the face of Helvellyn. One ice axe, some micro-spikes, a couple of walking poles, 2 scotch eggs, a cheese and pickle sandwich, 2 mad dogs and 20 Marlboro Lights. Catstycam it is then….

Morgan on the path up to Swirral Edge

As we headed up Swirral to join the path for Catstycam the sun disappeared and it got a little on the cold side. Time to get a shift on…

One positive was some pretty good views looking north, where we could see all the way to Scotland, including the lovely (sic!) wind turbines… 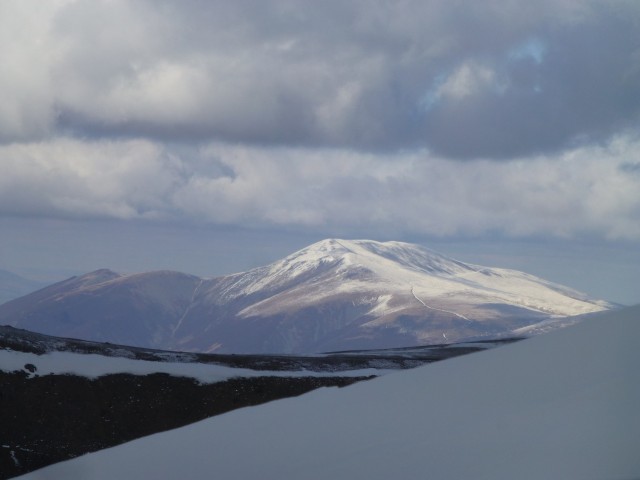 The path up was not too bad – a bit of snow but nothing too serious. It was enough however for Mountain Man Mike to don some micro-spikes – unusual for a man who’d happily go walking in his slippers..

Anyway we made good time and Morgan and Scruffy raced ahead to check the summit and all seemed good..

Once up top the views, despite the cloud, were still pretty good…

And zoomed in on Morecambe Bay 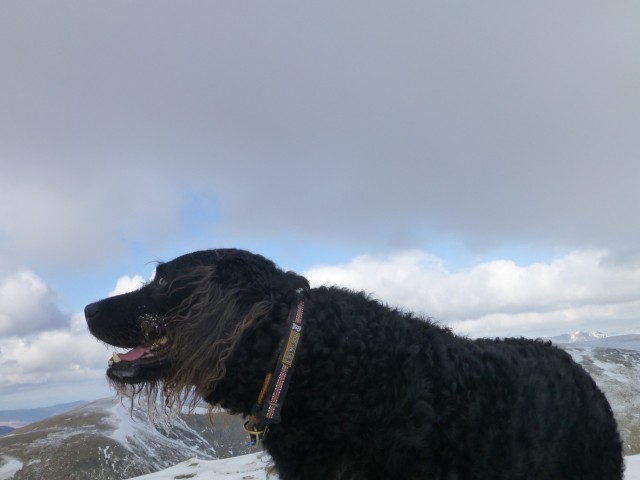 Scruffy shows off his Ice Beard…

I also took the chance of a bit of zoom lens people spotting…. 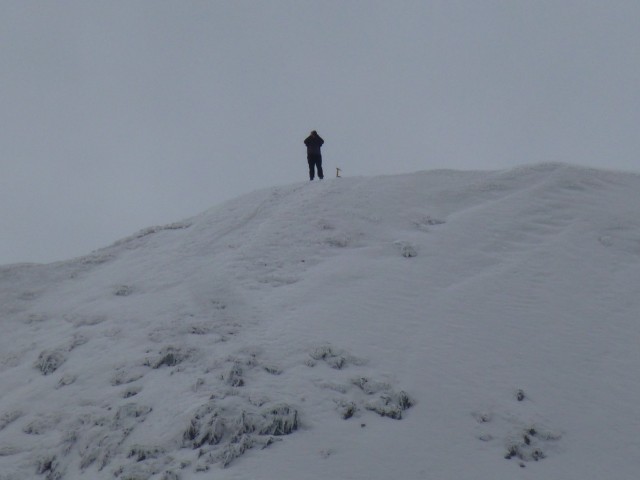 Man with Ice Axe on Helvellyn

Man on Helvellyn Snow Gulley – rather him than me..

Photos done it was too cold to hang around – time to head home.. 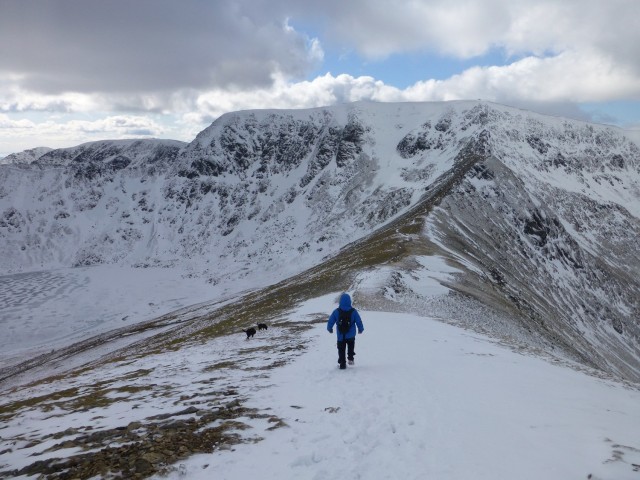 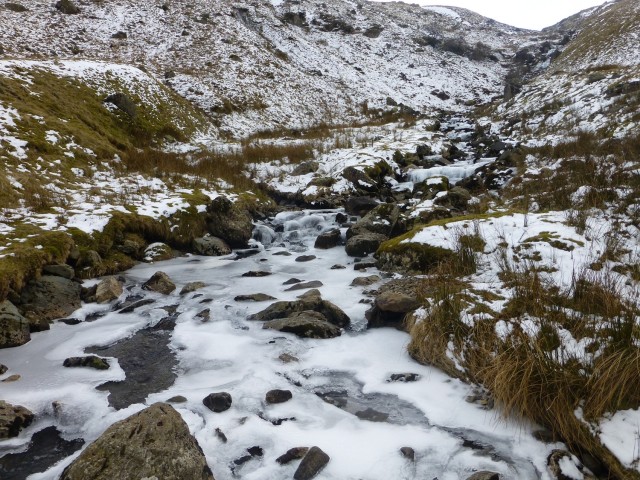 Yet another grand day out in the Lake District…. 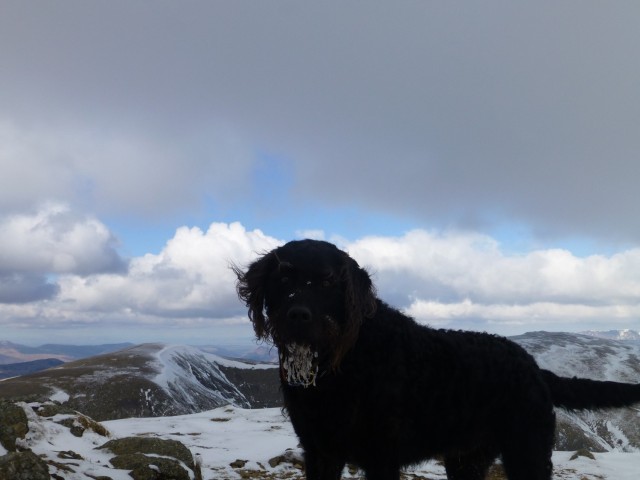