Helvellyn in the Snow

We’ve had the first snow of the year in the last week here in the Lake District. This is a blog about the ascent Morgan and I made yesterday. I wouldn’t bother too much with the rambling words, just take as look at the photos which I hope you’ll enjoy!

Morgan and I have been looking at the snowy peaks for the last few days and had taken various pictures at all times of the day and night, diligently posting them on the helvellyn twitter page and generating some nice feedback. However on Sunday someone asked the not unreasonable question of “what’s it like on top then?”. Well there was only one way to find out…

Having been up Helvellyn many times I was happy with the route to take. However I’d never been further than Red Tarn in snow conditions. Not being a born Ranulph Fiennes type I’ve never been drawn to the idea of clinging onto the fell with an ice axe, crampons and a big bushy beard. I’ve also lived here long enough to know how dangerous it can be. The one story from last year that kept going through my mind was of the poor guy who went to the loo on the edge of the summit of Helvellyn, stepped on a cornice and fell to his death. One to avoid for sure. Obviously I should obey the basic rules – go properly equipped with ice axe and crampons, go with an experienced winter walker and all that stuff. As I mulled it over on Sunday night I decided to hell with all that. I’d take a couple of walking sticks, a wooly hat, my trusty George Fisher Micro Spikes, 20 Marlboro Lights and of course Morgan. What could possibly go wrong. For the avoidance of all doubt I decided to get up there before anyone else so I could take my time and not cause too much embarrassment. If it looked a bit dodgy I’d stop at Red Tarn, take some photos and head for home. Plan set, rucksack packed, alarm set for 05:30. Time for bed 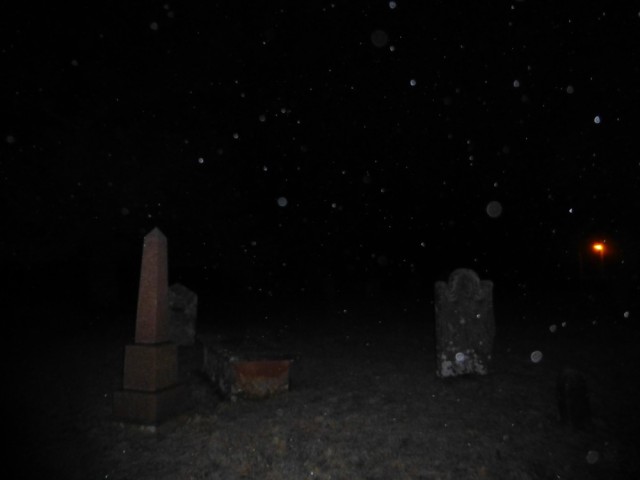 Walking through Patterdale Church 06:00 – it was dark!

Alarm goes off. After the usual moment of “can I really be bothered?” I was up and at em. Morgan looked at me oddly as I clambered down the stairs and then saw the rucksack and realised that it was fun time. After a quick wake up Marlboro and having loaded up my pockets with dog treats, we set off. By heck it was dark. The moon was just visible but shrouded in cloud. I hoped that the forecast was right and it would clear – I was buggered if I was going to walk all the way up there in the clouds. We headed through the Churchyard up to the Grisedale Valley and set off for hole in the wall. Knowing my utter lack of fitness I reckoned on getting there around 07:3o for a photo and fag break – hopefully in time to see the sun rise.

Hole in the Wall

Morgan looms out of the darkness with snowy peaks behind

The way up to hole in the wall was fairly uneventful. Always nice to do it first thing when there’s no ultra fit bugger sprinting up behind you and overtaking you with a cheery “nice day for it”. The only issue was the camera. Couldn’t seem to get it to actually take pictures that were visible. Should have checked it out before I left. Time to dig out the head torch and have a proper look. After a few minutes faffing and as we broke through the mist and the light started to improve suddenly I seemed to be taking pictures that weren’t out of some sort of Halloween fest – hallelujah..

Breaking through the cloud and finding growing daylight

We finally reached the snowline just below hole in the wall. As expected with no fresh snow for a few days the path was well trodden and nowhere near as icy as I remember for a few years back. So it was a case of lumbering up the final steps and getting to hole in the wall pretty much on schedule. Time for a quick fag break…

Sun Rising in the East from Hole in the Wall

Now at this point I should mention that the one thing I’d been dreading about arriving at Hole in the Wall was getting Morgan over to the other side. You’d have thought that given he’s an active dog who spends a few hours a day scrambling around on the fells he’d be more than capable of climbing over the ladder. Not a bit of it. This is a dog who insists on being lifted into the boot of the car, who looks at me dolefully whenever we encounter a style on a walk. Sometimes I wish I’d got a spaniel and not a 6 stone labrador as a pet… 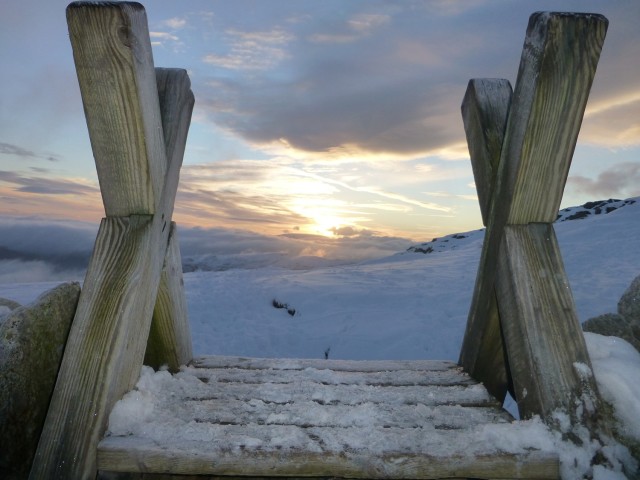 Off to Red Tarn

By now the sun was hitting the summit of Helvellyn, which was still shrouded in mist. There was about 6 inches or so on snow underfoot, it was wonderfully quiet – all in all it was bloomin marvellous to be up there. So we headed off to Red Tarn still unsure whether we’d go all the way up or just stop and go home once we got there. I resolved to follow my own mantra – if you can see the top then go for it, if it’s clouded over then don’t bother. Once we got to Red Tarn the cloud was obviously lifting, the path up Swirral looked pretty well defined and my mind was made up – let’s do it..

I decided to avoid the Tarn itself as Morgan would only dive straight it and frankly it was a little cold so we skirted around and headed for the path up Swirral Edge. I was fairly confident of making it most of the way and decided to don the microspikes if it started getting a little dicey. It was only when we had started heading up the Swirral path that I looked back and realised there was a tent set up by Red Tarn. Now bear in mind it was darn cold and these hardy souls had been camping. Rather them than me. Having decided that they were not frozen to death as we saw them moving around I carried on up the path. Always good to know you’ve got an audience if you do get into trouble and tumble off the path – just shout loudly on your way down…

Morgan on the way up Swirral

The path up was fairly well trodden and it wasn’t until half way up that I decided to don the micro spikes. I’d made the mistake of following Morgan rather than the footsteps and suddenly found myself walking on fresh snow with the path 10 feet above me. Not really my bag. Microspikes donned I clambered back up to the path and cursed the hound for leading me astray (again…). 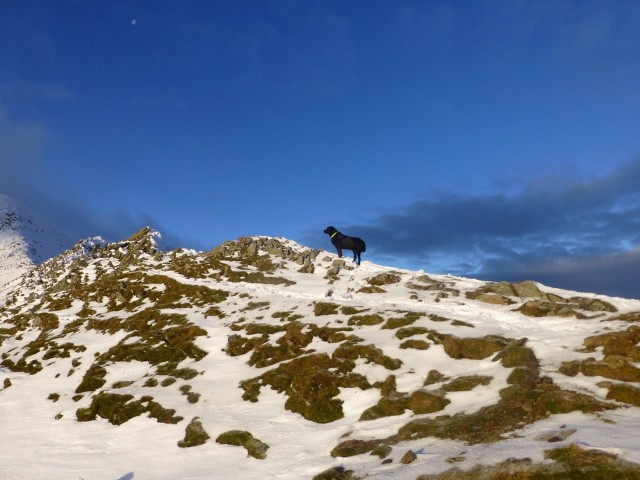 Morgan walked the edge – I followed the path below…

All went well until the top of Swirral when the path stopped and there was 15 feet or so of no path just a couple of channels in the snow. Time to rely on the microspikes and clamber up. After all the top and Morgan awaited.. 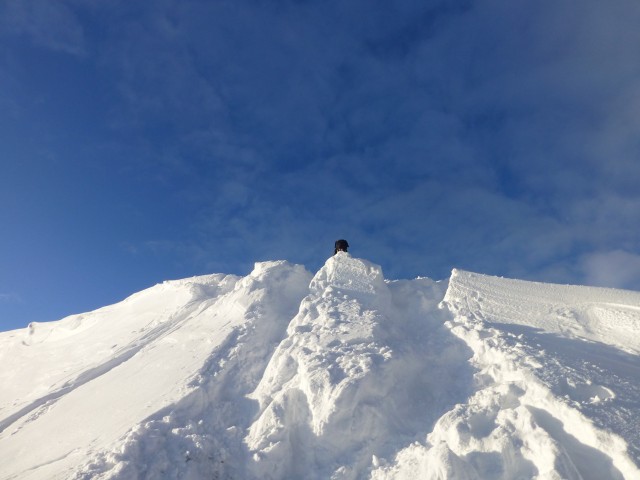 Morgan awaits my arrival at the top of Swirral Edge

The Top of Helvellyn

By now the sun had cleared Striding Edge and cloud on top had gone. Truly stunning. Enough of the words for a bit – here are some of the pics from the top 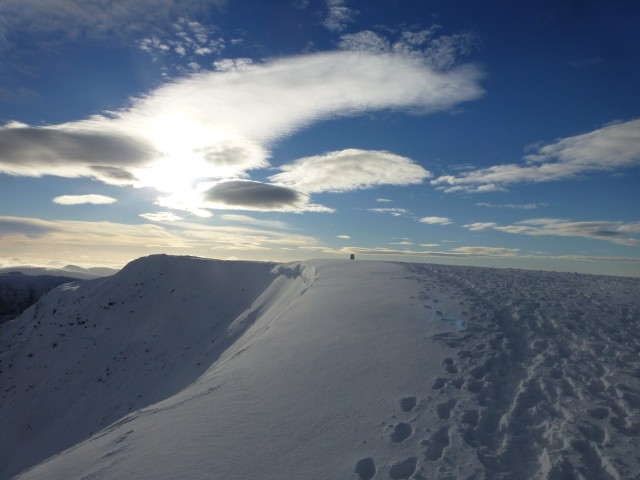 Note the 15 foot of virgin snow need the edge! 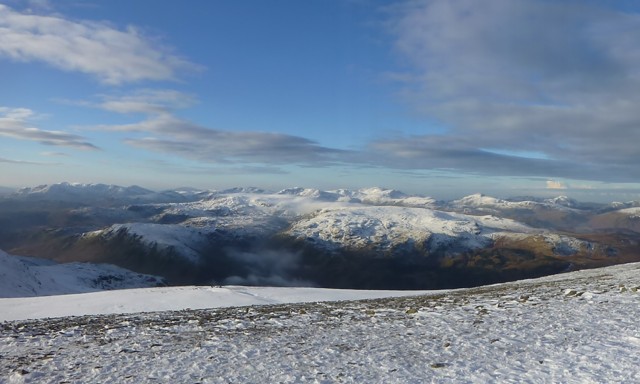 Looking West from the summit of Helvellyn 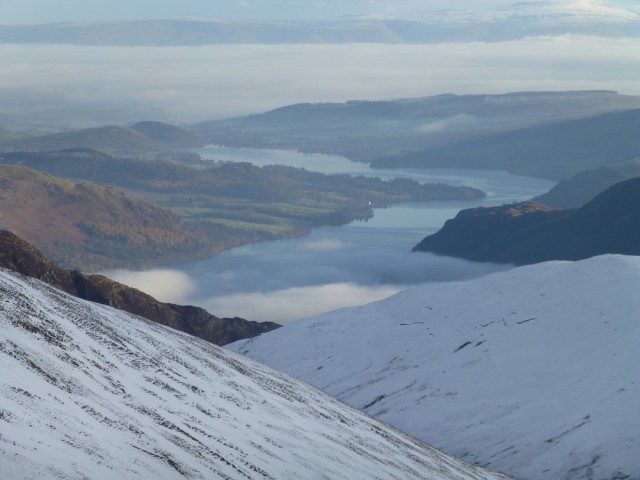 Inversion over Ullswater to the East

Cornice on the summit of Helvellyn

We are not alone! 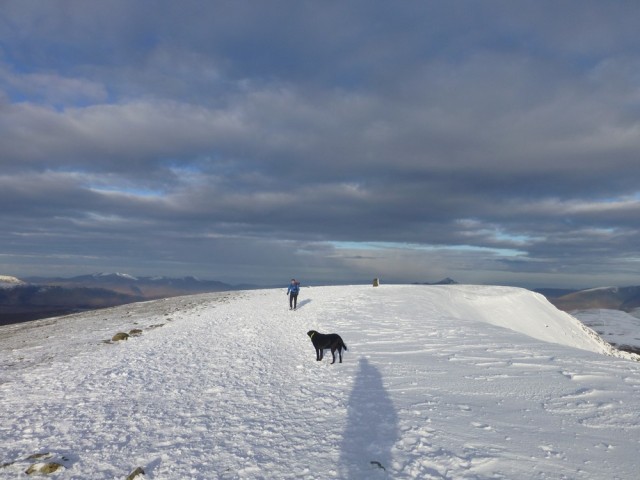 So we’d made it up first and had been ratching around for 20 minutes or so when Morgan spotted an intruder on our solitude. A very nice guy who come up from Thirlmere (probably in about a third of time it had taken me to heave myself up). We had a quick chat and then he disappeared off to take some photos and I decided it was time for us to head down. 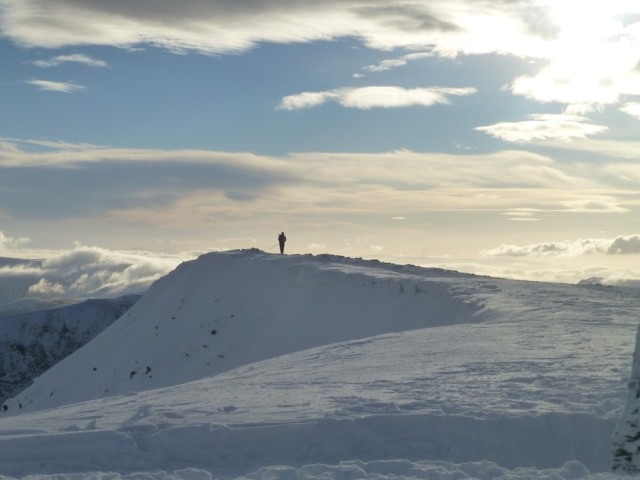 Hope he got some good photos!

I was a little worried about the descent – always trickier than the climb up. I decided to go back down Swirral as at least I knew most of it was OK. Rather that than risk Striding Edge. The worse bit was the first 2o feet. I decided to boldy slide down the first part which would have been fine except Morgan thought it was a big game and jumped on me and suddenly our considerable combined weight took us hurtling off piste toward the edge. I frantically tried to shove the dog off me onto the fell side whilst trying to slow myself down ast the same time. Obviously I succeeded but with about 2 feet to spare before oblivion beckoned. More hound cursing and then onwards and downwards…

The view back up on the way down as it were.. 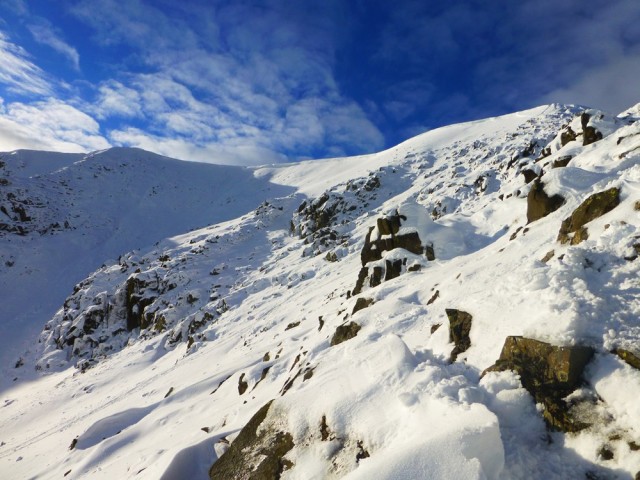 Another one on the way back down looking up 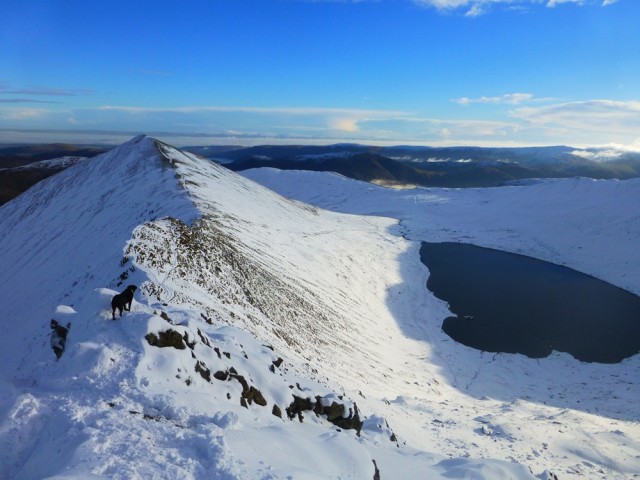 Catstycam and Red Tarn and Morgan

We saw the jolly campers heading up to Catstycam as we were heading down, bumped into another happy walker just by Red Tarn, and saw some nutter jogging along the top of Striding Edge. At this point I must apologise to the guy we bumped into as by this point I’d run out of dog treats so when we whipped his breakfast out Morgan was on him in a flash….

Morgan moves in on someone’s breakfast 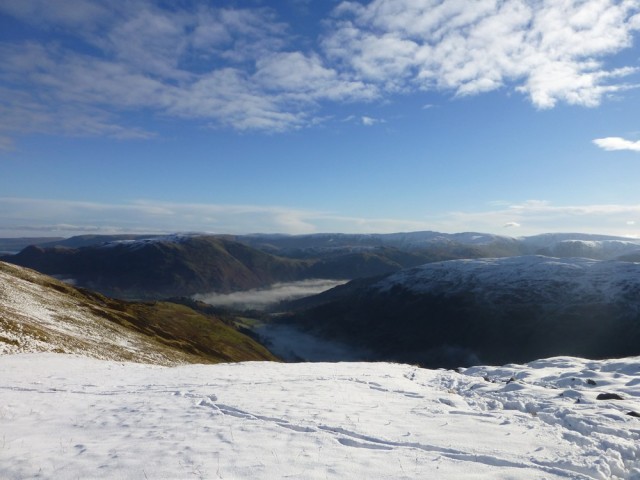 Looking west from hole in the wall

We plodded back to hole in the wall, I hefted Morgan over and we headed down the path – energised by the breathtaking views, the excitement, and the fact I’d run out of dog treats so Morgan was in a rush to get back to civilisation. We had the usual encounters on the way down where I was able to smugly pronounce on the conditions up top as we passed all the usual ultra fit types who’d have left me in their wake had they set off 4 hours earlier… 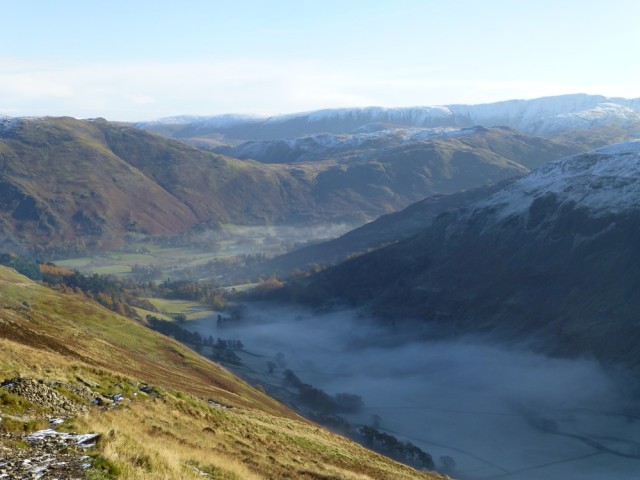 Inversion over the Grisedale Valley 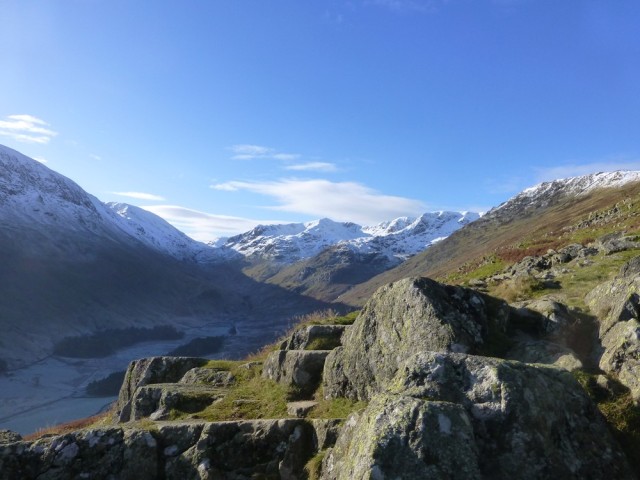 Looking back up the Grisedale Valley – one of my favourite views….

We made it back to the valley floor where it was still darn cold and frosty out of the sun, and headed straight for Morgan’s second home, the wonderful Patterdale Village Store, where Tom and Gillian revived Morgan with various Dog Biscuits and the usual love and attention. I made do with some more Marlboros.

We then headed home, Morgan to spend the rest of the day crashed on the sofa (or at least until the evening walk), me to spring into action cleaning our Patterdale Holiday Cottage – available to rent at very reasonable prices throughout the year!

So job done. We’d survived and thrived but I wouldn’t recommend a hike on the tops in the snow without the proper equipment and training. Maybe I should add crampons and an ice axe onto my Xmas list, as well as some winter training. Or maybe not. Until next time….

Please feel free to follow our exploits on Twitter and Facebook. If you fancy a jaunt to the Lakes why not check out our Ullswater Cottages.

16 Responses to Helvellyn in the Snow