A quick blogpost on my recent efforts on the Patterdale Parish Boundary Walk. This annual fundraiser for Patterdale School and Church involves a 30 mile, 10,000 feet of ascent walk. There is also a 14 mile walk and this year there was also a new 7 mile walk for children and grown ups who have more sense than to participate in the other walks. This year there was a record turnout for the event with around 124 people taking part in the various walks.

Having started off with the usual good intentions for the walk itself with the aim of making it less painful than in previous years my training schedule soon floundered in a haze of beer and nicotine, meaning I was as unfit as ever for the main event. I did manage a little training in the last week albeit on the short 7 mile walk. Some bright spark decided it would be a good idea to have marker flags on the route for this walk, and even better to attach questions to each marker pole to make the walk more interesting for those involved.

So the Wednesday before the walk itself I joined a motley crew of fellow walkers including 2 fellow amigos armed with a lump hammer, 24 cunning questions set by Stephen Gorton, the indefatigable organiser of the event, and 24 posts capped with surplus England car flags. All went well for the first 200 yards and then Mike, one of the stalwarts of team amigo, decided to walk off the path and went down with a clatter. His acting skills have obviously improved of late as he was doing a very good impression of a man turning very grey and passing in and out of consciousness.  Chris gamely decided to head back up the hill to get his car and between us we managed to throw Mike down to the roadside to await rescue. Needless to say by the time he was in the car he had recovered sufficiently and was very disappointed when he finally got to hospital to find out he had only sprained his ankle.

Never one to be put off by a near death experience, Stephen roused the remaining party to carry and on and 4 hours later all the flags were in place, along with their questions. My remaining training for the week involved running the course every morning from then until Saturday to make sure the flags and questions had survived the ravages of the weather and disgruntled England fans. Luckily they did.

The Main Event – The First Half

Having lost Mike the Amigos team was now down to Chris, veteran of the 2009 walk, Vince (aka Gene Hunt), myself and Scruffy – Chris’ faithful hound. We were joined as well by a team from Lovetoescape, our holiday accommodation website. The lovetoescape team was lead by Gavin “Sherpa Tennents” Mitchell – a veteran mountain man keen to get in some training before heading off the Matterhorn in a few weeks. He was joined by Mark “Cooking Lager” Quinn and Fraser “The Dude” Campbell. After a short delay while Mark struggled to get his new fandango Platypus to deliver any fluid we made it to Glencoyne Bay at around 05:00 to join up with Chris, Scruffy and Vince. 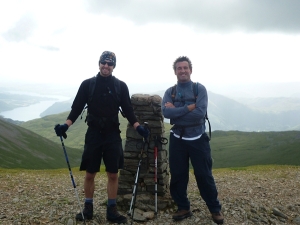 The walk up from Glencoyne to Greenside should be a fairly gentle ascent but it was clear within about 5 minutes that I was once again going to be the slacker in the team. Sherpa Tennents quickly decided he needed to complete the course in about 30 minutes so set off to stalk groups ahead of us. Thanks to my appalling uphill walking (lack of) ability we were swiftly overtaken by most of the teams on the long walk.  This did give me a chance to say hello to a few people (and have a quick breather) including Simon and Joanna Bowen – regular stalwarts of the walk.

We made it to the top of Helvellyn without too much bother (well at least for all except me). By this time Sherpa Tennents had disappeared into the distance and the group had formed into a regular pattern for each ascent. Fraser and Mark would trail blaze up each fell as quickly as possible and then smugly sit at the top waiting for me to come huffing and puffing up. Chris and Scruffy would either charge up with the leaders or keep me company at the back. Vince would distribute slabs of home made flapjack to anyone coming within reach.

Rather than bore you with a blow by blow account of each and every fell conquered or not as the case may be suffice to say that by lunchtime Mark and Fraser were still raring to go, as were Chris and Scruffy. Vince had decided that the whole thing was not as much fun as sitting down watching the footie with a can in hand, and I had once again decided that I needed to stop smoking.

At Kirkstone Pass we were greeted by the welcome site of the local WI dispensing tea and cake, as well as a grinning Sherpa Tennents sat sunning himself, having arrived about 2 hours before us. At this point we were also met by Mike, still hobbling very convincingly and his family. Vince quite sensibly decided that enough was enough and chose football over the second half of the walk and Chris and Scruffy as planned beforehand, led a team on the 7 mile course. Chris also gamely took down all the flags as he descended – much appreciated!

So I joined the lovetoescape team and found the pace even more debilitating. The second half of the walk is frankly a bit of a trudge once you have made it to the top of Thornthwaite Beacon – where we all thought the Beacon itself was going to land on us in a heap as it seemed to be swaying wildly in the wind…. 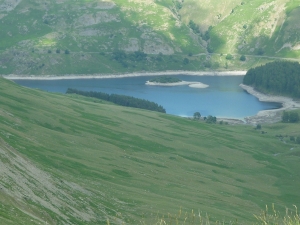 Mark, Fraser and I continued on and got to Boredale Hause and took the sensible decision to skip Place Fell in order to make it back down in time to light the barbeque and chill the beers ahead of the evening’s festivities. And so we headed to the finish at the School for more tea and cakes before driving home for the first beer of the evening. Job done (almost!)….

Thanks again to all those who took part in this years walk and also the many helpers who manned the checkpoints and provided the much appreciated catering. If you’d like to sponsor any of the teams who took part in the 2010 walk or take part in 2011 yourself please visit the Patterdale Parish Boundary Walk Website.